The State of the American School Superintendency: 2010 Decennial Study

This report from AASA provides the largest and most comprehensive look at the men and women leading the nation's public schools. 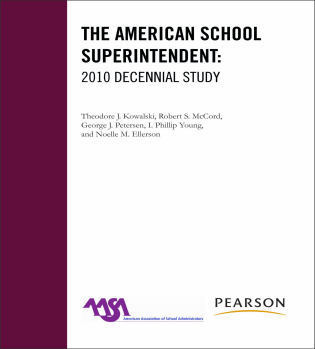 The American School Superintendent: 2010 Decennial Study, a must-have report published in December 2010, offers a definitive look at the state of school leadership in the United States. It provides a detailed picture of the men and women leading the nation’s schools and the districts in which they work. It is based on a representative sample of school leaders nationwide.

Among the key findings in the study:

The work is a collaboration of five authors:

Theodore J. Kowalski is professor and Kuntz Family Chair of Educational Administration at the University of Dayton.

Robert S. McCord is an associate professor in the Department of Educational Leadership at the University of Nevada, Las Vegas where he co-directs the Center for Education Policy Studies.

George J. Petersen is professor and dean of the School of Education at California Lutheran University.

I. Phillip Young is a professor of education at the University of California-Davis and is co-director of a joint doctoral program involving U.C. campuses and the California State University-Fresno.

Noelle M. Ellerson is assistant director of policy analysis and advocacy at the American Association of School Administrators.